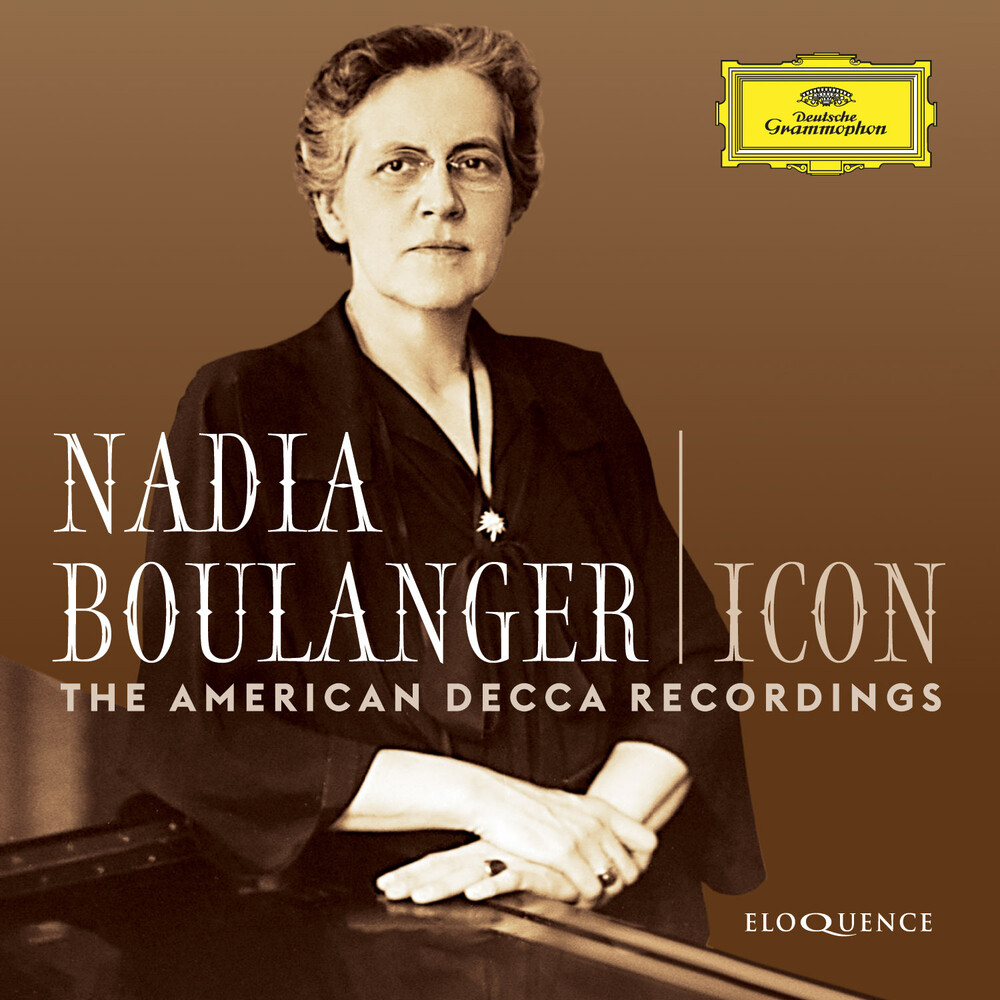 From Monteverdi to Brahms via French Baroque rarities: the Decca Gold (US) legacy of Nadia Boulanger, a complete musician. Newly remastered and issued complete for the first time, with fascinating liner notes by Nigel Simeone. Original Jackets, Limited Edition. Composer, teacher, organist, pianist, harpsichordist, choir trainer, conductor, musicologist: there seemed to be no end to the talents of Nadia Boulanger though she liked to insist that her gifts paled in comparison to her tragically short-lived sister, Lili. Nadia compensated with ceaseless industry. By the time of her early twenties, having studied with FaurĂŠ and undertaken the famously rigorous Paris Conservatoire formation, she was already reviving Bach cantatas in concert. In this guise she came to the attention of the American heiress and assiduous sponsor of avant-garde culture in Paris, the Princesse de Polignac, and with her support founded a vocal consort which made valuable and often-reissued HMV recordings of Monteverdi and Brahms in the 1930s. Boulanger's postwar recordings for American Decca, while also made in Paris, are much less widely known, having been issued on Brunswick LPs with limited availability outside the US and on Decca Gold in the US. Having returned to Paris after her wartime exile on the American east coast, she revived her consort for concerts at the Polignac salon, drawing together the most resilient of her older colleagues, such as the tenor Hugues CuĂŠnod, with younger vocal talents such as Nadine Sautereau and Irma Kolassi, who had already established an international career for themselves but were devoted to Boulanger and her tender tyranny in securing precise, selfless and stylish performances of a repertoire that was still largely the exclusive property of scholars rather than musicians. As well as returning to Monteverdi, the American Decca sessions of 1952-54 venture into what was then much less familiar territory, of chansons and madrigals by the likes of Josquin, Lassus and Le Jeune, winding up with a typically flamboyant JanĂŠquin showpiece which imitates an entire aviary. Then there are pioneering records of excerpts from music-dramas by Charpentier and Rameau, and finally a return to Brahms's domestic vocal music, though as with Monteverdi in 'new' and complementary repertoire, the Neue Liebeslieder and a selection from the more introspective late vocal quartets Opp. 92 and 112. On all these records Boulanger's affection for the music shines through, as well as her scrupulous attention to the detail of it's expression.
HOURS: Mon 11am-7pm Tues / Wed / Thurs 11am-9pm Fri 11am-10pm Sat 10am-10pm Sun 11am-7pm