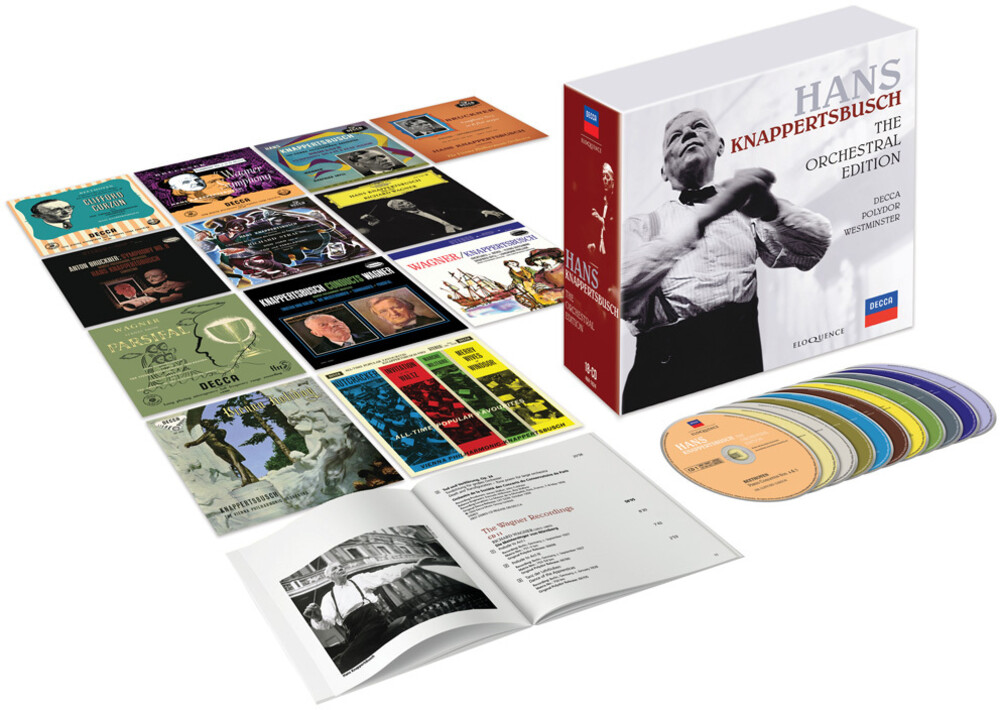 Gathered together for the first time on Universal Music labels, including several first CD releases on Decca, is the orchestral legacy of an inimitable genius of the podium: Hans Knappertsbusch. Even in his own lifetime, Hans Knappertsbusch divided opinion, between listeners affronted by technical slips caused by his notorious aversion to rehearsal and those who saw in him the last representative of a performing tradition dating back to Richard Wagner. Working mostly in the opera houses of Munich and Vienna, he never became music director of a symphony orchestra, but his postwar Decca recordings of central repertoire from Beethoven to Strauss, including three distinguished concerto collaborations with Clifford Curzon, preserve interpretations of a flexibility, sweep and grandeur scarcely imaginable today. For Decca, Knappertsbusch recorded with the great orchestras of London, Paris, Zurich, Geneva and Vienna. The orchestral discography began with Brahms's Second Symphony with the Suisse Romande, Wagnerian 'bleeding chunks' in the Kingsway Hall in December 1947 and ended in February 1960 in the Sofiensaal of Vienna, conducting Tchaikovsky's Nutcracker Suite with a delicacy and grace that will surprise listeners who think of him only as the high priest of Parsifal at Bayreuth. The box is full of such surprises: an album of Strauss waltzes and polkas that turns on a sixpence; nimble Bruckner scherzos; one of the swiftest versions of Tod und VerklĂ¤rung on record. Once introduced to Clifford Curzon, Knappertsbusch was immediately enthusiastic about performing and recording with 'this great English gentleman'; their versions of Beethoven's Fourth and Fifth and Brahms's Second have long been mainstays of the Decca catalogue. Much else here is newly remastered and now widely available on Decca for the first time in many years, such as Wagnerian overtures and preludes with the Zurich Tonhalle (1947) and the London Philharmonic (1948) orchestras. Bruckner's Symphonies Nos. 3-5 (1954-6) preserve Knappertsbusch's profound working relationship with the VPO at it's most harmonious. A magnificently trenchant Brahms album with the VPO in 1957 also features Lucretia West in the Alto Rhapsody. For devotees and sceptics alike, this box offers revelations and the opportunity to reassess the art of a conductor held in the deepest affection by many of the musicians and singers who worked with him.
HOURS: Mon 11am-7pm Tues / Wed / Thurs 11am-9pm Fri 11am-10pm Sat 10am-10pm Sun 11am-7pm
This website uses cookies to personalize content and analyse traffic in order to offer you a better experience.
I accept Learn More
back to top