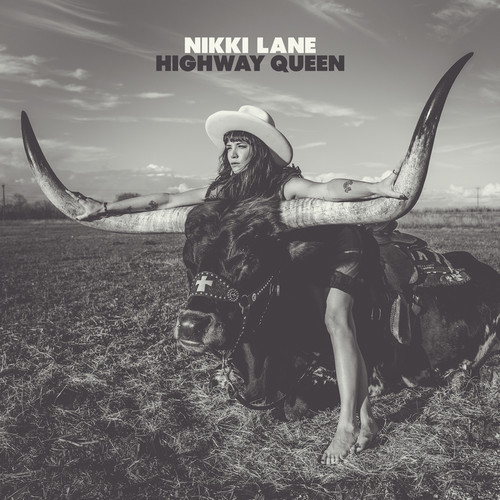 Nikki Lane’s remarkably dazzling third album Highway Queen, out February 17, 2017, sees the young Nashville rebel emerge as one of country and rock’s most gifted songwriters. Produced by Lane and fellow singer-songwriter Jonathan Tyler, and recorded in Denton, Texas and Nashville, Tennessee, Highway Queen is an emotional tour-de-force. Blending potent lyrics, unbridled blues guitars and vintage Sixties country-pop swagger, Lane’s new music will resonate as easily with Black Keys and Lana Del Rey fans as those of Neil Young and Tom Petty. Highway Queen starts with the whiskey-soaked restlessness of “700,000 Rednecks,” a rowdy call to action, and ends on the profoundly raw “Forever Lasts Forever,” where Lane belts freely, mourning a failed marriage – the “lighter shade of skin” left behind from her wedding ring. Lane’s journey to heartbreak takes exquisite turns. “Companion” is pure Everly Brothers’ dreaminess (“I would spend a lifetime/ Playing catch you if I can”). Elsewhere, she goes on a Vegas bender on the rollicking “Jackpot,” fights last-call blues (“Foolish Heart”) and tosses off brazen one-liners at a backroom piano (“Big Mouth”). Lane, a Greenville, South Carolina native, is unique songwriter who didn’t take the traditional country artist path. Her backwoods roots are undercut by her chosen career as a fashion entrepreneur (she’s the owner of vintage clothing boutique High Class Hillbilly) who has lived – and been heartbroken in – Los Angeles, New York and Nashville. So it’s no surprise that her music seamlessly crosses musical genres with lyrics steeped in the doomed perseverance only a true dark horse romantic knows. Lane’s rapid rise in music is thanks to the fervent critical acclaim of her debut record Walk of Shame and 2014’s Dan Auerbach-produced All or Nothin’. With Highway Queen, 2017 is poised to be Lane’s major mainstream breakthrough. "I want to be the highway queen," Lane told Rolling Stone in 2015. "I'm obsessed with trucks, just like every other fucking country singer. But I want to make my own,” she said banging her fists on the table of a chic East Nashville cafe. So as she sings on the title track: place your bets, if you ain’t folding.