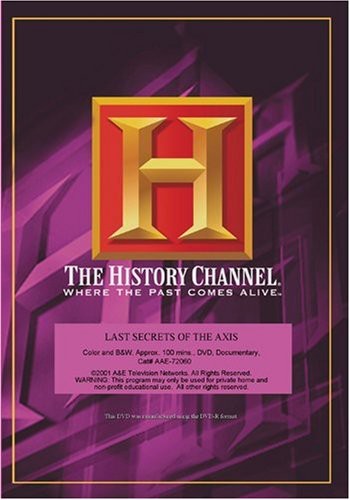 One of the most compelling stories of World War II concerns the origins of the unlikely alliance between the Axis powers. While many people imagine that the union was forged along the lines of the enemy of my enemy is my friend, the real story is far more complicated. LAST SECRETS OF THE AXIS picks up where the popular HISTORY CHANNEL special THE SAMURAI AND THE SWASTIKA left off, examining the remarkable historical confluence that led to the rise of German-Japanese cooperation. At the heart of story is Karl Haushofer, a geography professor (and the man who coined the term geopolitics). The program explores the professor's convoluted role, following him from the origins of the Reich to the Nuremberg Trials. LAST SECRETS also reveals details of many overlooked engagements, including a coup in Iraq, backed by German and Italian forces, that had the long-term goal of establishing a Persian Gulf base for Japanese submarines!From unsung battles to back-room dealings, this is a compelling examination of the LAST SECRETS OF THE AXIS.
HOURS: Mon 11am-7pm Tues / Wed / Thurs 11am-9pm Fri 11am-10pm Sat 10am-10pm Sun 11am-7pm
This website uses cookies to personalize content and analyse traffic in order to offer you a better experience.
I accept Learn More
back to top