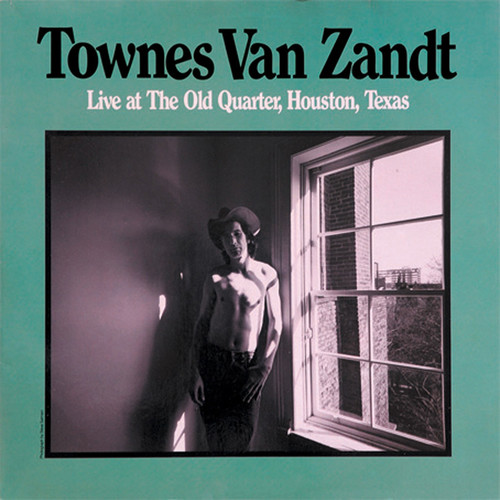 Live at the Old Quarter
Artist: Townes Van Zandt
Format: Vinyl
New: NOT IN STOCK IN OUR STORE, BUT AVAILABLE TO ORDER $30.98
Wish

Live at the Old Quarter, Houston, Texas is a double live album by Texas singer/songwriter Townes Van Zandt. The recording captures Van Zandt in a series of July 1973 performances in an intimate venue and there is a strong critical consensus that this recording is among the most exemplary of Van Zandt's career. In July 1973, Van Zandt performed a string of shows over five sweltering nights at the Old Quarter club owned by Rex Bell and Dale Soffar that were recorded on a portable four track by Earl Willis, the album's producer and engineer. They would eventually be released four years later by Van Zandt's previous producer and manager Kevin Eggers on his new Tomato Records label. The liner notes describe the recording as the "Rosetta Stone" of Texas music. One can hear Van Zandt's influences in covers by artists like Bo Diddley, Texas bluesman Lightnin' Hopkins, and country picker Merle Travis. Van Zandt's most famous works can also be heard, such as "If I Needed You" and "Pancho and Lefty" played to an audience not already familiar with these songs. The singer's laconic banter and corny jokes are also on full display. The album is also noted for the intimacy of the performance, with Van Zandt taking the stage alone and accompanying himself on guitar as he did thousands of times during his career. In the 2007 biography To Live's To Fly: The Ballad of the Late, Great Townes Van Zandt, John Kruth writes that Van Zandt played "to nearly a hundred folks per set, packed shoulder to shoulder within the club's bare brick walls. The room was so jammed that it was impossible for a waitress to wend her way through the crowd to take drink orders. People had to pass money hand over fist and wait, in hopes that a mug of cold beer would eventually find it's way back to them." Van Zandt is introduced by Dale Soffar and, after apologizing for the busted air conditioning, performs a gentle reading of "Pancho and Lefty". At the end of the song the singer remarks, "I've never heard it so quiet in here." The photograph on the album cover was shot by Steve Salmieri.
HOURS: Mon 11am-7pm Tues / Wed / Thurs 11am-9pm Fri 11am-10pm Sat 10am-10pm Sun 11am-7pm
This website uses cookies to personalize content and analyse traffic in order to offer you a better experience.
I accept Learn More
back to top