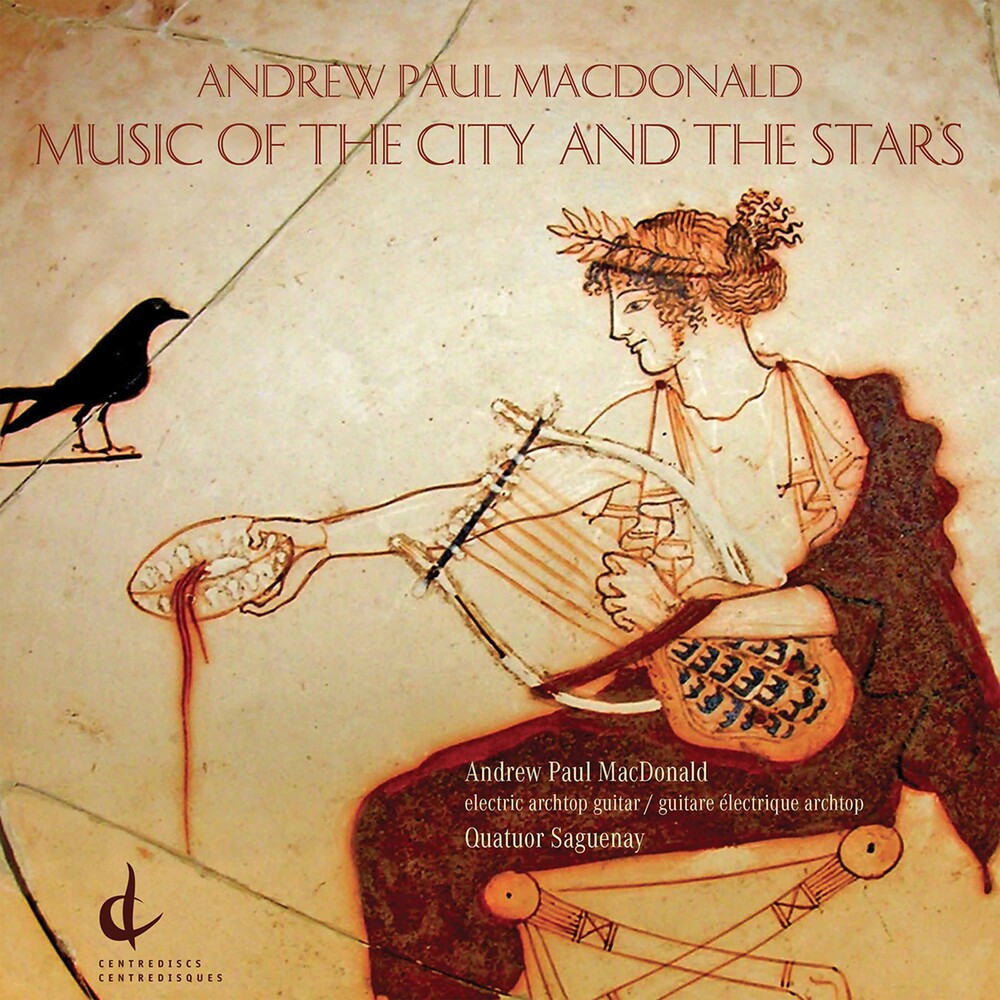 Music of the City and the Stars features two new compositions by Andrew Paul MacDonald where he is the featured soloist with the Quatuor Saguenay. The opening work, Lyra, is a musical examination of the constellation Lyra set in seven movements played segue. The piece opens with Hermes' invention of the lyre as his gift to Apollo and follows it through the magical hands of Orpheus as he encounters the Argonauts, Eurydice, Hades, and finally the Bacchants. The work closes with Zeus placing the lyre in the heavens in memory of the great musical wizard. Exotic string writing and electronic effects applied to the guitar create an eerie and timeless atmosphere. The album's companion work, Restless City, features both concerto-like exchanges and intimate expressive passages. Set in three substantial movements, this jazz-inspired composition pays homage to bebop legends Charlie Parker, Tadd Dameron, and Thelonious Monk. Acclaimed Canadian composer Andrew Paul MacDonald was recently appointed to the Order of Canada for his contributions to Canadian music. His compositions have won many prestigious prizes, including the 1995 JUNO Award for Classical Composition of the Year for his Violin Concerto. Renowned as a composer of works for symphony orchestra, opera, chamber ensembles, and soloists, MacDonald has been commissioned by artists across Canada and performed around the globe. A protĂ©gĂ© of Alexandre Lagoya, MacDonald is also a concert guitarist who has premiered a number of works especially written for him. Formerly known as the Alcan Quartet, the Quatuor Saguenay consists of violinists Marie BĂ©gin and Nathalie Camus, violist Luc Beauchemin, and cellist David Ellis. Based in Saguenay, Quebec, the quartet has developed a reputation for excellence throughout Canada and internationally since it's formation in 1989.
HOURS: Mon 11am-7pm Tues / Wed / Thurs 11am-9pm Fri 11am-10pm Sat 10am-10pm Sun 11am-7pm
This website uses cookies to personalize content and analyse traffic in order to offer you a better experience.
I accept Learn More
back to top