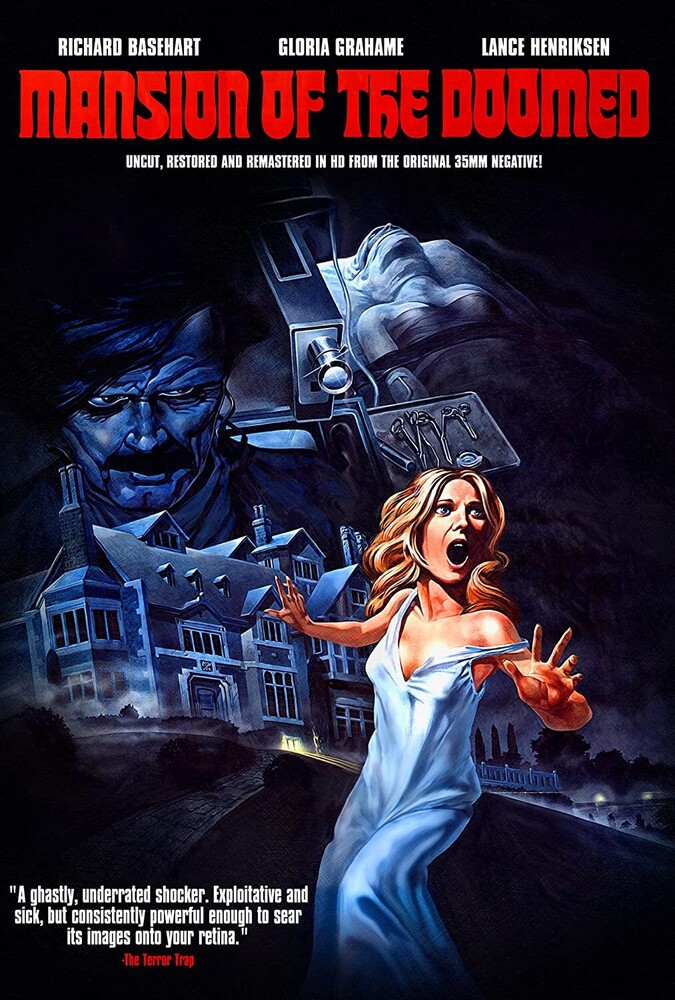 Screaming out of 1976, Charles Band's MANSION OF THE DOOMED stands as one of the most lurid and unsettling exploitation films of all time, presented here for the first time uncut, restored and remastered in HD from the original 35mm negative! Richard Basehart (BEING THERE, TVs VOYAGE TO THE BOTTOM OF THE SEA) stars as the maniacal Dr. Leonard Chaney, a brilliant surgeon who compulsively kidnaps people and rips out their eyeball, dumping their bleeding bodies into a filthy basement cage. His master plan? To use these ill-gotten orbs and transplant them into the skull of his daughter, who herself was blinded in a tragic accident years before. Taking it's cues from Georges Franju's notorious 1960 French shocker EYES WITHOUT A FACE but careening off in wild, gruesome new directions, MANSION OF THE DOOMED (aka THE EYES OF DR. CHANEY and HOUSE OF BLOOD) is producer and Full Moon founder Band's first horror film (and is listed as #1 in the Full Moon catalog) and also features an early co-starring role from future genre icon Lance Henriksen (ALIENS) as well as a memorable performance from Hollywood legend Gloria Grahame (OKLAHOMA!, BLOOD AND LACE) as Chaney's complicit nurse. Full Moon is thrilled to be bringing this masterpiece of shock back, better than it has ever looked before.
HOURS: Mon 11am-7pm Tues / Wed / Thurs 11am-9pm Fri 11am-10pm Sat 10am-10pm Sun 11am-7pm
This website uses cookies to personalize content and analyse traffic in order to offer you a better experience.
I accept Learn More
back to top