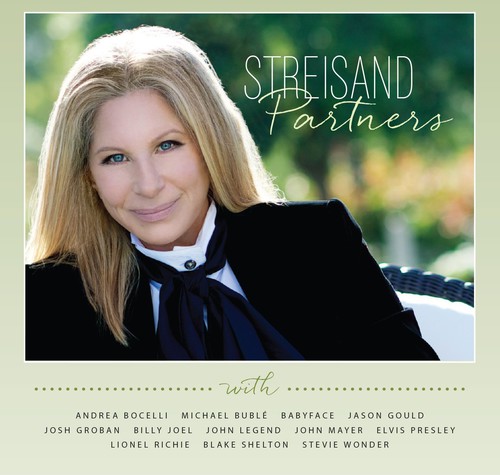 "Partners" is Barbra Streisand's new album, featuring 12 inimitable new Streisand duets with the world's greatest male vocalists. This is the legendary artist's first duets album in more than a decade, and debuts new studio recordings of Streisand classics and others songs.

"Partners" is comprised of 12 songs, many of which are regarded as Streisand classics. Among the songs included are "New York State Of Mind," with Billy Joel, "Come Rain Or Come Shine," with John Mayer, "Love Me Tender," with Elvis Presley, "The Way We Were," with Lionel Richie, "What Kind Of Fool," with John Legend, "People," with Stevie Wonder, "I Can Still See Your Face," with Andrea Bocelli, "Evergreen," with Babyface, and Ms. Streisand's first studio-recorded duet with her son Jason Gould, on "How Deep Is The Ocean."

Ms. Streisand is currently the best-selling female recording artist in history and the only woman to make the All-Time Top 10 Best Selling artists list. She has recorded 51 gold, 30 platinum and 13 multi-platinum albums in her career, including nine #1s, and is the only recording artist to have accomplished #1 album in five consecutive decades. Recognized as an icon in multiple entertainment fields, Ms. Streisand has attained unprecedented achievements as a recording artist, actor of stage and screen, concert performer, movie producer, film director, author and songwriter. In her accomplished career she has been awarded two Oscars, five Emmys, ten Golden Globes, eight Grammys, a special Tony award in 1970 as star of the decade, and two Cable Ace awards the only artist to receive honors in all of those fields of endeavor. Ms. Streisand is the recipient of the American Film Institute's Lifetime Achievement Award, the National Endowment for the Arts Medal, two Peabody Awards, A Grammy Lifetime Achievement Award and a Grammy Legend Award. Ms. Streisand is also the first film director to receive the Kennedy Center Honors.