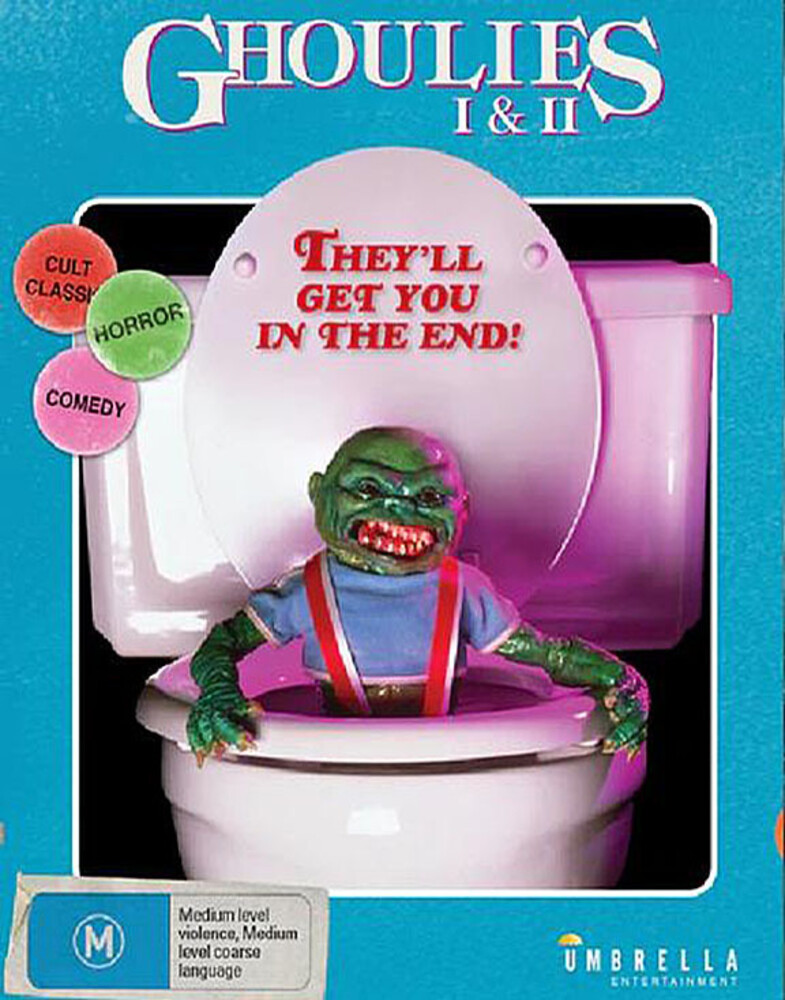 All the extras, all in one neat slimey package for Ghoulies 1 & 2. GHOULIES As a child, Jonathan (Peter Liapis) was almost killed by his father, Malcolm (Michael Des Barres), during a satanic ritual. After being saved and raised by Wolfgang (Jack Nance), who has kept him unaware of his background, Jonathan inherits Malcolm's house and moves in with girlfriend Rebecca (Lisa Pelikan). Through his explorations of the house, he begins unlocking the secrets and latent powers contained within his new found home. But there are other dark powers at work in the house powers more terrifying, more hideous than anything you've ever seen. It is foretold that Evil will triumph and Ghoulies will walk the earth... GHOULIES II The Ghoulies are back and more devilish than ever, as they turn an unsuspecting carnival into a house of pandemonium in this wildly outrageous sequel to the original smash hit "Ghoulies"! "Satan's Den" has received it's final warning either the not-so-creepy House of Horrors spooks-up it's act and scares some customers fast or it's gateway to hell will be closed for eternity. Just when Larry Prentice (Damon Martin) and his uncle Ned (Royal Dano) think there's not a ghost of a chance that the'll save their show, they get some uninvited visitors to spice things up. The Ghoulies make "Satan's Den" their home and profits soar as the demonic little creatures wreak havoc on the helpless fairground. So take a ride on the Ghoulie-Go-Round and play some Bumper Ghoulies - enjoy yourself because the Ghoulies will always get you in the end! Extras: GHOULIES Introduction by writer/director Luca Bercovici Feature length audio commentary with writer/director Luca Bercovici moderated by film historian Jason Andreasson Editing An Empire: An interview with Ted Nicolou The Mind Is A Terrible Thing To Waste: An Interview with Actor Scott Thomson Just 'cos of the Chick, Man!: An interview with Luca Bercovici Theatrical Trailer NEW! Two Extended TV cuts with extra footage taken from archival VHS recordings TV Cut 1 (1:57:24) TV Cut 2 (2:00:21) NEW! Ghoulies Unflushed: Audio Only Interview with Producer Jefery Levy GHOULIES 2 Introduction by Screenwriter Dennis Paoli Under A Magic Moon: An Interview with screenwriter Dennis Paoli Deleted Scenes Theatrical Trailer NEW! Shop Talk: Archival BTS Creature FX footage NEW! Ghoulies Unflushed: Audio Only Interview with Actor Phil Fondacaro NEW! Ghoulies Unflushed: Audio Only Interview with Creature FX artist Kenneth J. Hall
HOURS: Mon 11am-7pm Tues / Wed / Thurs 11am-9pm Fri 11am-10pm Sat 10am-10pm Sun 11am-7pm
This website uses cookies to personalize content and analyse traffic in order to offer you a better experience.
I accept Learn More
back to top